Terminator, The Second: Some Assembly Required

Instructions were followed, missing parts were found, and allen wrenches were thrown across the room. You know what that means: opening night is here.

“When I first heard about William Shakespeare presents Terminator, the Second, I’m pretty sure my eyebrows shot up to the top of my forehead,” says Sean McGuire, the actor portraying John Connor.  “As someone who loves unusual, badass shows I couldn’t help but be intrigued. My curiosity was immediately piqued.”

He didn’t go running away, screaming into the night after the initial pitch. This is always a good, if not rare, trait in an actor.

But he has a point – Bootless has no fear when it comes to unique, original theater; those familiar with previous mash-ups (Not the Messiah…, Evil Dead: The Musical) won’t be disappointed with this brand of off-beat theater.  Terminator 2: Judgment Day junkies are not going to walk away missing their favorite 90s moments, though they may walk with iambic pentameter stuck in their ear. All the famous lines are there. Even the infamous “I’ll be back” receives an Elizabethan overhaul.

“If you’re a Terminator fan but you’re unsure about Shakespeare, don’t let it scare you off! The memorable lines from the movie are there—sometimes they’re obvious and sometimes they’re used more as subtext, but they’re there,” states Melissa Kearney, the actress tasked with playing Sarah Connor.

This production isn’t just a short, sweet, one-night stand of a show: all of the actors have been working relentlessly to achieve the depth a “normal” Shakespearean drama would receive. 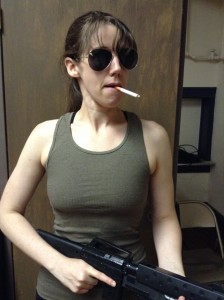 “Exploring Sarah’s vulnerability has been a challenge,” Kearney continues, speaking about the rehearsal process. “She can’t really show him how much she cares in ways that [John] can understand, but she is deeply affected by his faith in humanity (and cyborgs). You can see this particularly when (spoiler alert!) she trusts him enough not to destroy the Terminator’s chip in the gas station, and later when she is unable to kill Dyson.”

Okay, so maybe some spoilers.

Don’t miss out on what is sure to be a fantastic opening weekend – one filled with cyborgs, fight scenes, and Kearney “not reacting when someone licks [her] face.”