The Spy…and Mail Order Bride….and Innocent Bystander Who Loved Me: An Interview with Josh and Sarah

The 39 Steps is a hilarious, Hitchcockian, whodunit featuring over 150 characters performed by a stunningly large cast of …four actors!  Our hero,  Richard Hannay, played by Bootless newcomer Josh Innerst, is a man who leads a boring life until he is caught up in the intrigue and chaos of a mysterious spy organization.  Throughout the play, he finds himself entangled with three women- romantically and literally – all of whom are played by Bootless Alumni (and Josh’s wife in real life!) Sarah Joy Stone.

With opening night just days away, Jackie and I got a chance interrogate…I mean interview…. this husband and wife acting duo about their time with Bootless and what goes in to bringing this exciting tale of espionage to life. 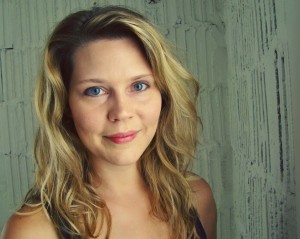 Josh : This is my first show with Bootless. My wife, Sarah, has done a few shows here so I’m looking forward to being able to work with her onstage again.  This is also the first show I’ll be able to do with Michael Gamache since we finished grad school together.

Sarah : I first appeared in Bootless Stageworks’ production of Jerry Springer: The Opera and then played Hildegard in Why Torture is Wrong and the People Who Love Them last spring.

Describe your character in The 39 Steps.

Josh : Richard Hanny is a 37 year old who is a bit fed up with the tediousness of his life. He’s been in London for a while after spending some time abroad and has found himself friendless, bored, and a bit depressed. He’s at a perfect place for something unexpected to happen.

Sarah: In The 39 Steps I play three characters: Annabella is a spy without a country, Margaret is a mail-order bride from Glasgow, and Pamela is an innocent bystander to a great adventure.

Have you done anything special to prepare for the role?

Josh: I’ve been growing a pretty epic handlbar mustache for the shows I’m currently in, so it’ll have to be trimmed down to a pencil Stache. I’m a big fan of facial hair. I’ve been doing Elizabethan plays non-stop for the last three years so I’m very much looking forward to doing something with a bit less elevated language.

Sarah: To prepare for the play itself, I have taken inspiration from black and white slapstick comedies and old Alfred Hitchcock movies. For Annabella, I have watched a lot of Marlene Dietrich interviews.

Why do you think audiences will enjoy this production?

Josh: Audiences will enjoy this show because it deftly combines intrigue and action with the zany energy of a farce. Everyone likes a good spy thriller. Everyone likes a good laugh. Combine the two and boom, you have a helluva fun time. I had a chance to see it on the West End and I laughed so hard my sides were in agony.

Sarah: Audiences will love the quick pace of the story, the wittiness of the dialogue, and the creativity of the set. Fans of Alfred Hitchcock movies will enjoy inside jokes, but no one will feel left out of the sheer enjoyment of this hilarious play.

Do you have any other exciting projects going on at the moment?

Josh: I’m just finishing up the Actor’s Renaissance Season at the American Shakespeare Center. Once “39 Steps” is finished I’ll be returning for the upcoming tour.

Sarah: I have been writing for Trouvé Magazine which has its first issue printed this spring.
Tickets for The 39 Steps available now!

Waiting to buy your ticket? If you bring a canned good or other non-perishable food item to the box office, you will receive $5 off the price of a regular adult ticket.  Already bought a ticket? Bring a donation anyway – and a friend! All proceeds go to benefit the Lutheran Community Services Food Pantry at St. Stephen’s Lutheran Church in Wilmington.