Opera Bares It All

When I say opera, what is the first thing that comes to your mind? Is it an image of a busty woman in a Viking helmet? A corpulent tenor? Boobs?

Here’s the thing: so many people think opera is an art form reserved for the elderly – that it’s outdated, dying, or already in the grave. To the contrary though, I’m surprised how contemporary opera is and people just ignore it. In fact, the genre tends to encompass every monthly media trend that pops onto HBO.

Not convinced? Let me elaborate.

From Game of Thrones to Outlander, TV is crawling with breasts (okay, maybe not the best turn of phrase). Opera isn’t so innocent either. Ever hear of The Dance of the Seven Veils? It’s a notorious piece in Richard Strauss’ opera, Salomé (yes, the biblical Salomé), where the title character performs a seductive dance in return for the decapitated head of John the Baptist.

Okay, forget that last bit. Let me get to the sexy part.

This dance was salacious at the time, and even now, because Salomé loses every scrap of her clothing. Oh baby. Performers consistently try to up the ante, baring their birthday suits to one opera house at a time. It’s practically impossible to see a performance of Salomé without seeing a stray breast sneak a cameo. 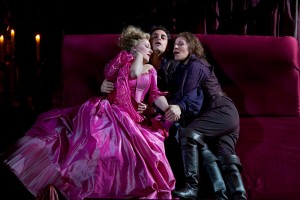 Without a doubt, the Casanova of the opera scene is Don Giovanni. He’s infamous for his little black book – listing all the women he has ever slept with. That doesn’t sound so bad. Let me put this into proportion: that’s 640 women in Italy, 231 in Germany, 100 in France, 91 in Turkey, and a whopping 1003 in Spain. Get the picture? This man got around.

You don’t get this on cable. What’s more, sex isn’t posited as a cheap thrill to boost ratings. These culminating acts of romance are bolstered by trios and duets that illustrate an actual blending of two (or more) bodies. Their bodies aren’t the only things getting it on: their voices are too.  That is entirely more intimate than a quick flash to enthrall the viewership.

Take, for instance, Mozart’s Cherubino in Le Nozze di Figaro. Not only is a woman playing a boy, that boy has to cross dress as a disguise during the second act. What could be better than Drag Race in period clothing? The only answer is nothing.  I could go on and on with the list, but it’s ever growing and practically infinite.

I could go into all the lesbian kisses this inspires in serious, historical works, but that’s another article for another day.

If opera is for the old, lucky them. The art form is thriving on what Comcast is charging premiums for. Not to mention, during all of the above, performers are singing some of the most intriguing, beautiful music ever to float past your ears.