Give My Regards to Braaaiiins…! 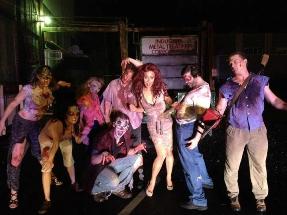 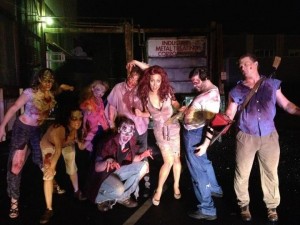 Zombies have been a horror staple for decades. No wonder: Satre said is best when he said “Hell is other people.” Well, Hell gets a tad bit scarier when you add mindless flesh eating to the people mix.

The zombie plague has experienced a resurrection in an odd place, though. Not a cemetery and not at the hands of Umbrella Corps. Oddly enough, the living dead have embedded themselves into musical theater. You heard me. Musical. Theater. Evil Dead: The Musical , the “first wave” of the Broadway zombie genre, enjoyed commercial success in Toronto, and even had a short stint Off-Broadway. The trend has only snowballed since then – spoofs, parodies, and serious adaptions have popped up across the nation.

Producers can’t be brain dead (see what I did there?), they can obviously see the hordes of attendees flocking to these off-beat gore fests. But what about zombie musicals draws a crowd? What makes them the center of so many new musicals?

1. The media is Overflowing With Zombies (in the Best Way Possible)

Name five movies or television shows, from the past 5-10 years, that have to do with zombies. Go ahead, I can wait. Mhmm. Shaun of the Dead. That’s a solid choice. Walking Dead? Yup, very popular. Whoa, okay slow down. Jesus, slow down! I can’t type that fast!

You get my point? Media is saturated with the goo that makes ghouls go. By tapping into these fanbases, musicals are able to tap into pre-invested audiences. All the stuff you just told me you watched? I presume you like it. I presume you watch it on a weekly basis in some cases. Wouldn’t you want to see a musical comedy about it? Of course you would. That’s what some theaters are banking on: in addition to their normal patrons, they can pull in others that may not be so theatrically-inclined.

Ever watch a great B horror flick? If not, I’m really confused what you’re doing on this blog. Anyway, what is the one image you have of that movie? Is it some scantily clad ingénue wailing while her eyes roll back into her head? Or a murderer gleefully hacking through a door with blood-fueled enthusiasm? Great! Worrisome, but great!

Now when do people sing in musicals? When they are experiencing something life changing. I would list witnessing the living dead as “life changing.” The heightened emotion and stress of the apocalypse creates a similar status-quo inherent in Les Miserables (okay…maybe I wouldn’t go that far) that inspires song. In short, the melodrama laden horror genre lends itself to a tap number. Just saying.

Theater has the beautiful benefit of being live. Anything can happen. Audiences often delight in the old trope of, “Look! The actor is in the audience!” So quaint. Musical theater thrives on “anything can happen.”

That includes flesh eating monsters from beyond the grave.
The musical theater genre welcomes the sudden “flash” scare that is prominent throughout horror films and haunted hayrides alike. And the fourth wall in no inhibition. Actors are able to actually scare – whether through surprise or invading personal space. Audience goers are screaming their heads off because an actor just popped out from under the stage. There’s real fear because the audience knows there will be blood and gore: but they’re not quite sure where it’s coming from yet.

Is the zombie musical a fad? Maybe. But does the zombie genre lend itself to musicals? Most definitely. They can be paired together like a good wine and cheese… or brains and more braaaains.