The countdown is on! The Christmas cookies are gone and the presents have been unwrapped.   ‘Tis the season for reflecting on the past year, celebrating the good times, and resolving to change those not so good habits (or at least try).

(Ten!) John DuPrez recently contributed to the soundtrack of the animated film The Wild (2006).

(Eight!) Eric Idle’s mother was a Health Visitor.  His father served in the Royal Air Force in World War II only to be killed in a tragic hitchhiking accident shortly following the war.

(Seven!) Eric Idle’s most recognized hit – “Always Look on the Bright Side of Life” – which was written for Life of Brian has since been covered by Harry Nilsson, Bruce Cockburn, Art Garfunkel, and the band Green Day.  Idle performed the song during the closing ceremony of the London 2012 Olympic Games.

Monty Python and Life of Brian

(Five!) Several names for the show Monty Python’s Flying Circus were considered including Owl Stretching Time; The Toad Elevating Moment; A Horse, a Spoon and a Bucket; and Vaseline Review. Flying Circus stuck when the BBC explained it had printed that name in its schedules and was not prepared to amend it.

(Three!) The film would never have been made without former Beatle George Harrison who put up £3 million to fund the production.  The original backers – EMI Films – backed out due to subject matter and Harrison “wanted to see the movie.”  George Harrison has a cameo in the movie.

(Two!) A 2011 poll by Time Out magazine ranked Life of Brian as the third greatest comedy film ever behind Airplane! and The is Spinal Tap.

(One!) On St. George’s Day, April 23, 2007, two members of Monty Python – Terry Jones and Terry Gilliam – led 5,567 people “clip-clopping” in time to the Python classic “Always Look on the Bright Side of Life” in London’s Trafalgar Square to set a Guinness World Record. 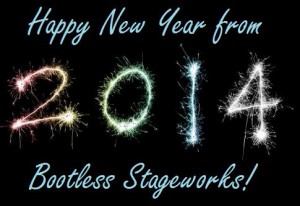