Ask the Actors: Elizabeth and Michael

The set is built and dressed, the costumes are ready, and the lines are memorized.  The Musical of Musicals is ready to open!  The show, which features four actors playing the same archetypal roles in five very different (hilarious) ways, is sure to be a good time for audiences, but what is it like to be on the other side of the footlights?

I spoke with two of the four actors to get their take on the show, their characters, and the rehearsal process.

What’s been the most rewarding or fun part of the process so far? Is this show challenging in any way?

This show has demanded a lot of creativity and versatility all around which is super fun because there has been no choice but to stretch myself beyond my comfort zone.

First, since we are self-directing, we are all making decisions about acting choices, blocking, choreography, how the music should go, etc.   Second, even just singing/acting the show would be more challenging than most. Since it is a 4-person show, we all have quite a bit to do and very little time when we aren’t onstage. And doing each distinctively different section justice means utilizing so many different vocal colors, making so many different acting choices, interacting and playing off each other with dynamics that are a bit different in each section.

Talk to me about your character in the show. Have you done anything special to prepare for the role?

June is meant to be the typical soprano ingenue, but because this show combines so many different styles, I feel like I get to play 5 distinct characters. I’m really enjoying that variety. June is the young, beautiful soprano; always romantically involved with the tenor and the object of the baritone’s affection. She never has money to pay the rent and she is always asking the mezzo for advice. She is also pretty whiny and randomly falls asleep throughout the show.

In terms of special preparation, it’s been a side project of mine (sometimes joined by my cast-mate Mike) to watch musicals by each composer, because I was totally unfamiliar with some of them, and obviously it’s essential to understand the original before one can do a good parody.

What’s your favorite moment in the script/show?

I can’t decide. It’s either when I get act crazy and sing about all the little birds in my head as Jeune in The Woods, or when I get to die as Junita. I’ve never gotten to do either before, because the heroine is usually sane and marries the tenor instead of dying. 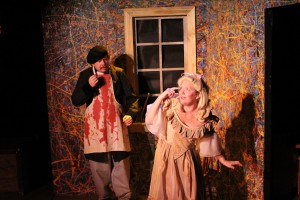 What’s been the most rewarding or fun part of the process so far? Is this show challenging in any way?

The show is extremely challenging. Because there are only four of us to make it work, you have to be on your game as much as possible. The musical styles shift greatly, and for some of us, certain styles are easier than others. I think the most rewarding parts are the ones where we have put a moment or scene together as a foursome, each person giving equal input and contributing.

Talk to me about your character in the show. Have you done anything special to prepare for the role?

Each of us play five characters. Now, those characters fill the same archetype in each section of the show, but the most important thing to know is what is being referenced. Most of our research has gone into familiarizing ourselves with the works we know least, and discovering ‘Oh, this music comes from this show,’ or ‘ah, that line is a lyric from this.’ Within that, each of our characters pull from many different characters of the original books, so you want to be true to that.

What’s your favorite moment in the script/show?

Well, my favorite section is probably ‘The Woods’, our Sondheim tribute, but that may be because I am most familiar and enamored of his work. I do enjoy the recurring joke in ‘Aspects of Junita’ that the music is ripped off, as a little dig at Weber. I suppose that just makes me CATty.