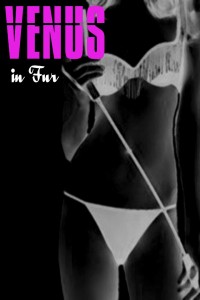 VENUS IN FUR by David Ives

STORY LINE:  Thomas Novachek is the writer-director of a new play, an adaptation of the 1870 novel Venus in Furs which inspired the term Masochism. He is on the telephone lamenting the inadequacies of all the actresses who showed up that day to audition for the lead character, Wanda von Dunajew. Suddenly, at the last minute, a new actress, Vanda Jordan, bursts in, the exemplar of every fault he has decried: needy, crude, compliant, desperate. She convinces him to read through his play, she as Wanda and he as Severin von Kusiemski. During this reading, Vanda shows astonishing insights into the novel and her character and the balance of power shifts as the actress establishes total dominance over the director, exactly as in the novel.

“To describe Mr. Ives’s play as a sex comedy may conjure images of creaky old farces involving philandering bosses and naughty secretaries. But while it’s as funny…is also something darker, stranger and altogether more delicious: a suspense-packed study of the erotics (and the semiotics) of power, in which the two participants prove to be seriously, almost scarily adept.” – Charles Isherwood, The New York Times

Venus in Fur is not suitable for young audiences. The play contains mature themes and language.