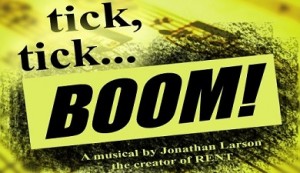 Before creating RENT, Jonathan Larson had another story to tell…his own.

Jon is a soon-to-be 30 year old, rarely successful composer, on the brink of falling into an oblivion. His girlfriend, Susan, wants to get married and move out of the city (tick,), his best friend, Michael, is making big bucks on Madison Avenue (tick…), yet Jon is still waiting on tables and trying to write the great American musical (BOOM!). A 90 minute non-stop retrospective, tick, tick… BOOM! poignantly depicts a struggling artist who wonders how much longer he can sanely balance his passion and goals with the mounting realities of relationship, job, money, doubts and fears. With instantly appealing melodies chronicling the gambit of emotions felt while finding one’s way through life, tick, tick…BOOM! captivates audiences of all ages.

Bootless Stageworks is supported, in part, by a grant from the Delaware Division of the Arts, a state agency, in partnership with the National Endowment for the Arts. The Division promotes Delaware arts events on DelawareScene.com.