The Trump Card by Mike Daisey 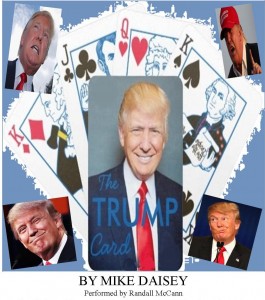 Does anyone really know Donald Trump?

Through a monologue written by the incredible Mike Daisey, and as performed by local artist, Randall McCann, THE TRUMP CARD takes audience members on a compelling 90 minute exploration into the magic that is The Donald and why Trump’s campaign is a work of political theater. Hear Trump’s story – from his early days as a young real estate developer to the candidate before us now – tracking him as he makes himself into a new American archetype – the very first rich man famous exclusively for being rich. Instead of dismissing Trump as a simple con artist and huckster, THE TRUMP CARD breaks down what makes Trump tick, and in doing so, illuminates the state of our American Dream and how we’ve sold it out.

“Scary and hilarious…Daisey is one of the best storytellers in the country.” – Broadway World

Come dress as your favorite political icon. Join in the Politician Impersonation Showdown.