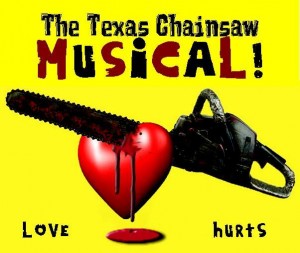 The Texas Chainsaw Musical! is the story of a handsome serial killer, his overly affectionate Momma, the women he loves, and the pantywaist runt that ruins everything.  It is not based on the 1974 horror film, but on the same events that  inspired The Texas Chainsaw Massacre, Psycho, and Silence of the Lambs: Wisconsin serial killer, Ed Gein. In the musical, Eddy Gee has been tormenting the residents of Plainfield, Texas since he was a child.

After a traumatic event, Eddy snaps and goes on a rampage, but things get problematic when he falls in love with one of his intended victims. Over-the-top humor, absurd but authentic characters, and moving, catchy tunes lead us through the lives of the four main characters as they trip over each other toward an unexpected and shocking ending.

If you like Bootless’ take on Evil Dead, The Musical, you MUST see this show. Splatter Zone seating with tons more bloody fun.  Meet the Author and Composer at a Q&A after select shows.

The Texas Chainsaw Musical! is everything like Evil Dead, The Musical.  Shows will sell out quickly.

The theater house is divided into Splatter Zone and General Seating. All seats within those areas are first come, first served basis.  If you want to be down and in front, make sure you arrive at the theater early.  History tells us that audience members begin lining up outside the theater an hour or so before curtain time.  Latecomers, even those with tickets, will be seated at the discretion of management.

NO OUTSIDE FOOD OR BEVERAGE PERMITTED.  PHOTO ID IS REQUIRED FOR BAR SERVICE.

THIS IS A VERY MESSY SHOW.  BOOTLESS IS NOT RESPONSIBLE FOR DAMAGE TO CLOTHING OR ANY OTHER PERSONAL PROPERTY.