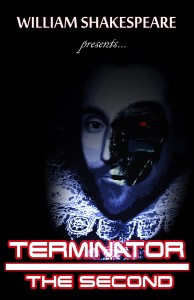 William Shakespeare presents Terminator, The Second
An adaption of the hit-action movie, Terminator 2: Judgment Day as only Willy Shakespeare would do it.

Terminator The Second is the story of a boy and his cyborg protector completed entirely with lines and phrases taken from original folios of William Shakespeare while only changing proper nouns, pronouns and corresponding verb tenses to accurately recreate a hilarious movie parody.

Devised by Husky Jackal Theater, the original intent was to perform the show one night only at a local rock club.  The project caught the attention of a number of influential websites and publications, including the SyFy channel, Gawker science blog i09, and Mental Floss magazine as well as reaching supporters as far-flung as Brazil, the Philippines, Australia, and the United Kingdom, thus allowing Husky Jackal to vastly increase the scope of its production.

Bootless is proud to present the first officially licensed production of Terminator, The Second.

Free, safe parking. Easy access from I-95.
Within walking distance to Trolley Square and its many dining options.