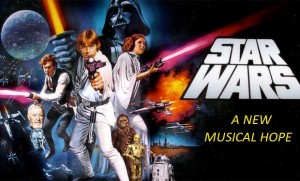 FOR SOLD OUT PERFORMANCES, PATRONS SHOULD ARRIVE NO LATER THAN 10 MINUTES PRIOR TO CURTAIN TIME.  IF YOU HAVE NOT CHECKED IN BY 7:45pm ON THURSDAY / 8:15pm ON FRIDAY & SATURDAY, YOUR SEAT(S) MAY BE RESOLD.

PATRONS WITHOUT TICKETS FOR SOLD OUT SHOWS MAY COME TO THE BOX OFFICE TO INQUIRE ABOUT NO-SHOW/RETURNED TICKETS. THERE IS NO GUARANTEE THAT A TICKET WILL BE MADE AVAILABLE. NO TICKETS WILL BE HELD AT THE DOOR.

Far off in a distant galaxy, the starship transporting Princess Leia, a young member of the Imperial Senate, is intercepted in the course of its secret mission by a massive Imperial Star Destroyer.  The dark, forbidding figure of Darth Vader appears along with the Empire’s mightiest weapon—a planet-sized battle station called the Death Star. Will Princess Leia escape in time to save the Rebel forces?  With help from the two loveable droids, R2-D2 and C-3PO, as well as handsome Han Solo, furry Chewbacca, Jedi Obi-Wan and her brother (spoiler alert) Luke Skywalker, of course she does!! But, only this time, the Princess does it to music with tap-dancing Stormtroopers.

Entertainment for the entire family.

JOIN IN THE POWER OF THE FORCE!