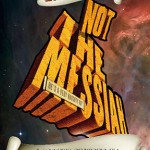 What’s that you say? Monty Python’s Life of Brian performed as an oratorio?  It can’t be true.  Oh, but yes, it is indeed true! Not the Messiah, was written and scored by Eric Idle and John Du Prez as a commission for the Luminato Arts Festival in June 2007.  Not the Messiah is a spoof of Handel’s oratorio Messiah. “If our [Life of] Brian was by Matthew then this is by John (but more John Lennon and John Du Prez). In other words, it isn’t sketches at all, but recitative and songs and the occasional Nine Carol Service Reader.” – Eric Idle

Not The Messiah tells the tragic tale of Mandy, impregnated by a Roman soldier, giving birth to Brian, a reluctant revolutionary of the People’s Front of Judea who falls in love with Judith, gets mistaken for a Messiah and is arrested by the Romans and sentenced to be crucified.

The musical style jumps around, and Idle described it as “baroque ‘n’ roll.”  It is a pastiche, reflecting pop, Welsh hymns, a naughty Mozart duet, country and western, doo-wop, hip hop, Broadway, Greek chorus, and Bob Dylan (in his mumbling, electric guitar and harmonica phase). “Hail to the Shoe,” “What Have The Romans Ever Done For Us,” “We Love Sheep,” “I Want To Be A Girl” and the classic sing-along “Always Look on the Bright Side of Life” are just a few of the glorious musical selections.

“It’s lively stuff, to be sure. In true Monty Python fashion, it’s a crazy soup-to-nuts, heavy on the nuts…. There’s bawdy music-hall humour, a touch of Noel Coward cleverness in the lyric…and a range of musical styles from gospel to mariachi. – Colin Eatock, Globe and Mail

TICKETS ON SALE NOW  –  $25 All Ages
(Event takes place upstairs in the church sanctuary with no assigned seating.)

Not the Messiah (He’s A Very Naughty Boy) is presented through special arrangement with Theatrical Rights Worldwide.