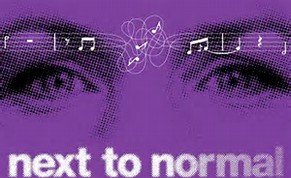 Book and Lyrics
by Brian Yorkey

Its story concerns a mother struggling with worsening bipolar disorder and the effects her illness has on her family. The musical also addresses such issues as grieving a loss, suicide, drug abuse, ethics in modern psychiatry, and suburban life.

Next to Normal received several workshop performances before it debuted off-Broadway in 2008, winning the Outer Critics’ Circle Award for Outstanding Score and receiving nominations for Drama Desk Awards for Outstanding Actress (Alice Ripley) and Outstanding Score. The musical opened on Broadway in April 2009 and was nominated for eleven 2009 Tony Awards, winning three – Best Original Score, Best Orchestration and Best Performance by a Leading Actress in a Musical for Alice Ripley. It also won the 2010 Pulitzer Prize for Drama, becoming just the eighth musical in history to receive the honor.

Next to Normal is presented through special arrangement with Musical Theatre International (NY).