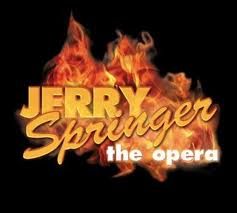 THE WEST END SENSATION COMES TO WILMINGTON, DELAWARE FOR ITS FIFTEEN SECONDS OF FAME.
CLICK HERE FOR TICKETS

NO ONE UNDER 16 YEARS OF AGE WILL BE ADMITTED WITHOUT AN ADULT PARENT OR GUARDIAN.
JERRY SPRINGER, THE OPERA IS FOR MATURE AUDIENCES ONLY.

The reviews are in:

“Though you’ve possibly heard plenty about this controversial but heavily awarded 2003 British-bred musical, there’s probably no way to adequately prepare yourself for its audacity and brilliance. Beyond the expected shock humor, this envelope-pushing show offers thoughtful ruminations on human desparation and longing as well as provocative theological themes. Composer-librettist-lyricist Richard Thomas and his co-librettist-lyricist Stewart Lee have fashioned an eloquent piece that’s musically rich, thought-provoking, and at times even wistful. In short oder, we meet the bizarre guests from a typically swarmy “Springer” episode, fervently singing their hearts out and constantly ready to engage in physical altercations. What happens after intermission is best kept a surprise, but the episode turns into a surrealistic fantasy brimming with ingenious nuances.” – Les Spindle for Backstage

“Fasten your seatbelt. Do not attempt to stand while this roller coaster is in motion. This ride has been value engineered to shock, rock, offend and entertain. Now you’ve probably heard two things about the show. First, that it was a major success in London, running over 600 performances and winning major theatre awards. Second, there have been spirited protests concerning the “religious” depictions in the show, including attempts to stop a national television broadcast and to intimidate local theaters into cancelling productions. Jerry Springer: The Opera has something to offend everyone, to be sure, if you are of a mind to take offense. This is an hilarious satire of a slice of real-life Americana. It’s a two and a half hour window into popular culture and mass audience taste (and I use the term loosely).” – Gary McMillan for DC Theatre Scene

“In a larger context, Jerry Springer, The Opera is the latest battle between fundamentalist Christians and secular artists in a conflict that has raged, off and on, for centuries.” – Tony Brown for The Plain Dealer

“This is, by any measure, a hilarious satire of the cult of Springer, something that gleefully impales all targets, from, yes, the rock that God’s holy church was built upon to the KKK, transsexuals and coprophagiacs (look it up—it’s worth it!). His show, and the opera based on it, was pure entertainment, even if it trafficked in the most outrageous of human behaviors. And if either is truly offensive, it’s not because of any overt appeals to the lowest common denominator, but rather the reality that sick shit like this really exists.” – Joel Beers for OC Weekly