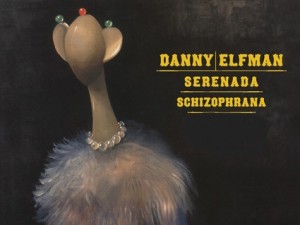 Please join us for a one night only concert in support of our Artist Fund.

This season, we’re going a bit off the track with our eclectic selections. Even though the choices aren’t musical theater related, they are nevertheless true to Bootless form.

We will again raffle off two baskets of cheer. And, as always, audience members are invited to the after-show party to meet the performers while enjoying a few tasty treats and a bit of drink.

All proceeds from the event directly support our artists.

This event will take place upstairs of our theater, in the sanctuary of St. Stephen’s Lutheran Church.

BERNARD HOLLAND – The New York Times (2/28/05)  –  Danny Elfman’s “Serenada Schizophrana,” is music that works. With six movements, rolling piano solos and the charming hoots and chirps of eight female voices, Mr. Elfman gave us music comfortable in its own world and highly professional in its execution. Hollywood, you say. Better good Hollywood music than second-rate Brahms. The composer of this piece has an ear for symphonic colors and how to balance them.

Review by bluntinstrument.org  –  It is a delight that Elfman’s first concert work strips away the stylistic embellishments that arose from his film projects (perhaps because of the visual stimulation) leaving a work basking in distinct pleasure of its own themes, rhythms and harmonic ingenuities – in much the form that he so admires in the work of his now-classic influences. The strutting of ‘Quadruped patrol’ reminds one somewhat of sections from Mussorgsky’s Pictures at an exhibition; “I forget”, with its bleating female chorus heralding the occasional rasping orchestral crescendo is a self-conscious emulation of Orff’s chant-based technique employed in Carmina Burana; ‘Blue strings’ is by turns a creepy and nasty look into Herrmann/Vaughan Williams territory; ‘A brass thing’ is a thumping brass-dominated march whose brittleness is pure Stravinsky, whose weird jazz turns are pure Stravinsky but whose enigmatic saxophone solos (almost Pictures again?), main theme, less illusive harmonic shifts and rhythmic fluidity are something else entirely.

It is perhaps in the outer movements when Elfman’s own voice is heard most on its own terms: ‘Pianos’ may employ an almost gamelan Glass-esque pianistic style, but it is firmly rooted in a thrilling driving momentum of its own (forward motion not being a Glass forte), and the way the very opening dramatically emerges from an almost Brucknerian ether into an unfolding harmonic build-up complete with tonal twists and orchestral luminosity is a Main Titles cue in extremus. ‘Bells’ shows the composer’s mettle in a different way, by building up a distinctly eerie sotto voce polyphony around a chanting tinckly theme reminiscent of similar in Sleepy Hollow etc… and then turning aside mid-way into a cataclysmic toccata finale before a coda hints at ‘Quadruped’ before ending on a cheeky octave leap-out-of-nowhere ending – here is an example of a composer who knows the effect of his music, how far he can stretch an idea, and finally how he can have the last laugh. Pure Elfman.